Facing History And Ourselves

are proud to present

This premiere performance will offer a unique collaboration between a cast of highly-accomplished African-American Broadway actors, and East Harlem young people from the Harbor Performing Arts Elite Ensemble.

All proceeds will benefit the performing arts programs at Boys & Girls Harbor. 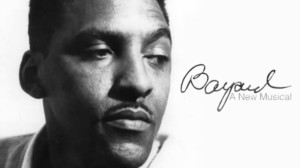 Bayard Rustin is acknowledged by historians as one of the two or three most pivotal civil rights leaders of the 1960s. He is widely recognized as the architect of the 1963 March on Washington. However, for decades, this great leader, who was often at Dr. King’s side, has been denied his rightful place in history because he was openly gay. Even today, Bayard Rustin’s legacy remains in the shadows.

The new production of BAYARD will afford proper, long neglected and deserved, recognition of a singular, positive force in our struggle for social justice in America.

Set in 1963, at the beginning of the creation of the March for Jobs and Freedom, the musical tells the story of how this activist and civil rights leader worked with Dr. Martin Luther King Jr. and A. Philip Randolph (along with the rest of the “Big Six”) to create a march that would unite the different Civil Rights movements and fend off southern segregationists. Rustin, who until this time had always been the “wizard behind the wall” — working in the deepest shadows of the movement — is now about to be thrust into the spotlight, a perilous place for an openly gay black man in the Sixties. This brand new production will afford proper recognition of a singular, positive force in our struggle for social justice in America, while also recognizing and demonstrating the present day need for unity in the struggle of all oppressed people … including our LGBTQ brothers and sisters.

Tickets Are On Sale Now!

All tickets will be held at the door.